A great gaming store in Fort Myers is closing down at the end of the month. I am very sad to have read that on facebook this morning. I have met some great gamers there (and a few crazies), and played some awesome games with them. When I found out that Kristen and I were having a girl, I went there to get her first set of dice. 🙁

I wish the guys there the best of luck in whatever they do.

I have changed out the site to WordPress. I am hoping this will allow us to add thing on a more regular basis. The message board/forum hasn’t changed. I am ditching some of the things that were never used (the chat thing, etc), and the members section is going away and being replaced by a resource/file repository. If you need any of your forum login information, comment below. If you need access to the resource section, let me know and I will make you a login.

Back to the begining 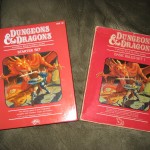 I stopped into a local game shop with my friend Erik on Saturday. He was looking for some minis and I was thinking about picking up a module or maybe a new guide book. After looking around for a bit, I saw a red box on a shelf. It was the new D&D Essentials Starter Set. I didn’t think it had been released yet (and according to Wizards website, it’s not out til 9-7-10). I quickly looked it over. I had heard a lot of rumors about the new Essentials line of products. Everything from it being D&D 4.5e, to a whole new game, to a throwback to old style D&D. I bought it and took it home to give it a once over.

It comes with 2 books, some maps, a sheet of tokens for players, monsters, etc, and a set of dice. The first book is for players. It is basically a ‘choose your own adventure’ book to help you decide what type of character you want to be. I choose the wizard class and the book takes you through a battle with some goblins. You continue to make choices and it instructs you to fill out your character sheet as you go according to the choices you make. The second book is the DM’s book and has basic rules, a selection of monsters, and some encounters. It presents the rules in a way that you could read them over with your friends and have a game going in a short amount of time. The boxed set only takes you up to level 2, but they are releasing more supplements over the next few months that will take characters up to level 30. It really reminds me of the boxed sets my mom got me when I was a kid (pictured above along with the new set).

I was skeptical at first when I read the rumors about what this would be doing to the game. Every time something new is released, there is always a group that cries “you’re ruining my game”  (I was one of these when 4e came out). I have changed my opinion of it. I think it is a great way to get new players into the game. With all of the books out now (3 player’s handbooks, 3 monster manuals, etc) I think it can get very confusing trying to build a character for new players. There are just too many choices. I think its a great way to introduce new players to D&D. It could also be used to veteran players who want things to be a little simpler. 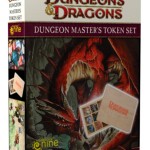 I just got my new Dungeon Master’s Token Set from Gale Force Nine. It’s probably one of the nicest gaming accessories I have ever seen. It comes in a nice wooden box with small compartments for the counters and a larger one for your dice, pencils, etc. The lid doubles as a dice tray and is lined with felt.

There are 50 tokens to help you keep track of ongoing damage, people who are bloodied, marked, other conditions. They are acrylic so you can use your mat markers to make notes on them.

I can’t wait to use this on Thursday when we get together to game. It is a really amazing set and I am really looking forward to using it.

Powered by WordPress and WordPress Theme created with Artisteer by Xapmat.